More Than Just 3 Questions: Getting the Most Out of Your Daily Scrums

The Daily Scrum is probably the most widely adopted mechanism in the Scrum arsenal. For good reason as it is a great communication and tracking tool for even non-Agile projects. Unfortunately people think that if they ask the standard three questions ("What did you do yesterday?", "What will you do today?", and "Are there any impediments preventing you from completing your work?") and keep it under 15 minutes then they are doing it correctly and getting the most out of this meeting.

While you might be abiding to the two basic rules above, this does not necessarily mean these meetings are beneficial. All too often the mechanism of this meeting is implemented without much regard to the underlying concepts that support it. Here are some tips and ideas around Daily Scrums I have gathered over the years I think help you get the most out of them:


The Daily Scrum is for the Team 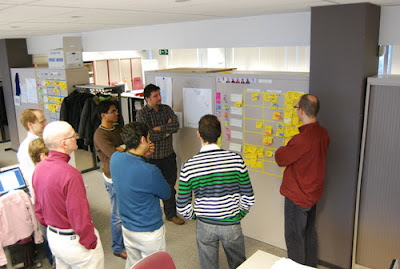 This meeting is not for reporting to the Scrum Master or anyone else for that matter. While anyone (including Chickens if they behave) can attend, the team members are reporting to each other. Sometimes just the mere presence of a VP or other manager causes the team to feel like they are giving a status update to this person. This often results in the chicken feeling the same way and emboldens them to ask clarifying questions or start directing the meeting. It may be as subtle as them moving it along by asking the next person to start, but it can quickly turn the orientation of the meeting. I see this most often if the Scrum Master cannot be present and an attending chicken thinks someone needs to be "in charge".

To prevent this (and its hard to do when you report to these chickens in some way) try a few of these suggestions:


Use a Task Board 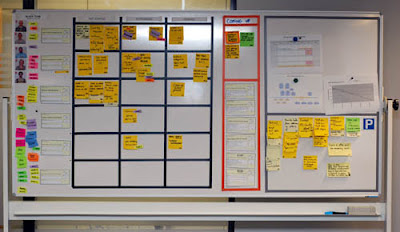 All too often with Scrum teams that do not use a task board for their Daily Scrums you here things like “I finished the widget class yesterday” and depending on how integrated the team is some of us may have no idea what the widget class is exactly and the fact that is it done does not give us any kind of clear picture of the progress for the User Story it belongs to. This is even less clear when you use a Agile management tool and people report things like “I finished task 24533 yesterday". If you are not intimately involved in that particular story you have no real reference to determine how it is progressing.

By using a story board you can get an idea of how a story is progressing even if you do not have any knowledge about it. By merely seeing the flow of tasks in their various states you can determine how much of it is done.

It is also easier to identify issues with stories with a task board. If someone has been reporting on the same 6 hour task for 3 days it becomes very clear there is an issue. Is there an impediment keeping them from finishing this task? Was the task originally scoped too small? Is this joker some kind of slacker? Even when people do not know they are in trouble the task board can identify the issue and them team can act appropriately.

(Note: I am planning a follow up blog post just about task boards later with more details.)

Another practice that deviates from the normal Daily Scrum rules is “walking the board”. Instead of asking the 3 questions, the team walks through each story on the backlog and says what tasks were done for each one, what is going to be started, and any impediments for that story. I was not a big fan of this at first when a client started doing it, but I think in some cases it works really well. If you do try this be careful that everyone on the team is participating since your attention is to the story and not the individual members.

Per Alistair Cockburn  an information radiator is something that show valuable project metrics that can be gained to a casual observer with a glance. This would include items like:
Placing information radiators like these in the Daily Scrum area help the team be aware of the status of the project on a daily basis. Make sure they get updated frequently to provide the most value. 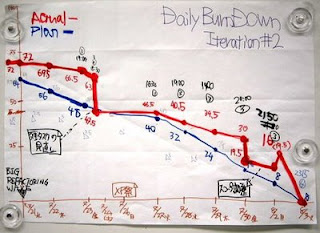 These are just a few ideas to try and remember that what has worked for my teams in the past may not work exactly the same for yours. For a quick test to see if you are getting good information from these meetings, gather the team after one of them (away from the room so they cannot cheat and look at any of the information radiators) and ask them questions like “how is the project going?”, “are we on target to reach our sprint goal?”, and “what is team member xyz working on today?” If your team members cannot answer these questions with a significant degree of confidence then they are probably not getting the most out of the meetings.
Posted by Tommy Norman at 11:59 AM