This week I attended a Certified Scrum Master course in Atlanta led by Jeff Sutherland and Joe Little. It was a great opportunity to hear best practices from the man himself. It was also great to be around a good group of people in different stages of adopting Scrum and we had some really great conversations. 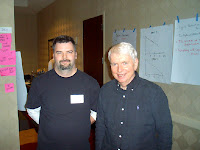 Me with Jeff Sutherland in Atlanta.

For my first post on the training I wanted to describe how the course itself was run. One of the interesting approaches was that the training was run like a Scrum project. Each day Jeff populated our Sprint Task Board with subjects we would cover that day. Each hour he would move the cards on the board and update a burn down chart. All of the exercises were time boxed and he kept things going with Tibetan meditation bells to end a session. 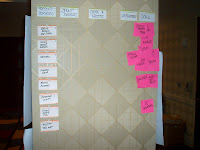 Our course's sprint task board.

The course manual had quite a bit of content and we did not make it all the way through the book. Jeff skipped around quite a bit and his slide deck had updated content that was not in the book but was provided to us afterwards. A good bit of content came from Henrik Kniberg's Scrum and XP from the Trenches book which I reviewed in my last blog post.

Jeff had many anecdotes of adopting Scrum from his many years of experience that made the ideas behind it a bit more real. There was a lot less rhetoric than I had anticipated and he backed up all the ideas with hard numbers from a multitude of studies. These numbers are great fodder for conversations with management when trying to convince them to adopt Scrum.

There were also some very cool activities that really illustrated the contrasts between traditional practices and those prescribed with Scrum. There are many paradoxes in Scrum (and Agile/lean processes) that produce results that are contradictory of what most people would think. I plan to post more info on some of these activities soon.

All in all it was a great class where I not only had a good bit of what I have been doing for that past couple of years validated but learned many new things as well. I would strongly suggest that if your company plans to implement Scrum that everyone involved in software development attend a training course of this type. Jeff recounted studies that have shown Scrum teams starting without a Scrum Coach or the right training normally only see about a 35% benefit initially where teams that are trained and coached well see a 400% increase in productivity.

Thanks to Jeff and Joe for a great course!
Posted by Tommy Norman at 12:55 PM 1 comment:
Labels: certified scrum master, jeff sutherland, scrum

Comfortably Scrum: Book Review for "Scrum and XP from the Trenches" 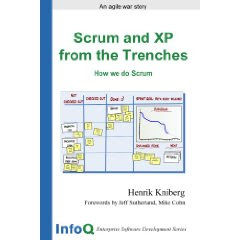 The book "Scrum and XP from the Tranches" by Henrik Kniberg was suggested reading for my Certified Scrum Master training course. You can download it for from from InfoQ and I highly suggest you do. It has been out for almost a year now so I am a little late coming across it and I really wish I had found it sooner. The book's format is great in that it is told totally from Henrik's point of view describing how his team adopted Scum (and some XP practices) at his company over one year. It does not have the same rhetoric as a few of the other popular Scrum books, but rather a basic outline of how they implemented the Scrum framework and the basic philosophy around each decision. He never claims that his process is the right way to do Scrum, but the one that worked best for his team. I found it realistic and pragmatic. It is a short read and goes very fast so with it being free you really can't go wrong with this one.

Conchango has released the 2.2 version of their Scrum Process Template for Team Foundation Server. This template is free and includes some great additions including a load of new reports, bug fixes from 2.1, and a web based report slide show. They have also provided a command line utility to upgrade your 2.1 template to 2.2. See the full details here.

They released the beta 3 version of their WPF Sprint Task Board application a few weeks ago which now supports the Scrum template 1.2 for TFS 2005 as well as 2.x on TFS 2008. It is going to be release by the end of this month and the pricing will be $90 per license for 10 copies or under. You can get discounts for larger volumes.
Posted by Tommy Norman at 12:53 PM No comments:
Labels: Conchango, scrum, Task Board for Team System

Yesterday I drove down to Huntsville, AL to present to the local .NET user group. The meeting was hosted in a very nice auditorium on the Intergraph company campus. The majority of the attendees worked for Intergraph who has been recently adopting Scrum and evaluating using TFS for their management tool. I ended up delivering both the "Intro to Scrum" talk in an abbreviated form and then going right into my "Implementing Scrum using Team Foundation Server" presentation. The crowd was very engaged and there were some great conversations afterwards.