I received my official Certified Scrum Master certification from the Scrum Alliance this weekend. Apparently I received my training a month before they instituted a test for the certification. This has been hotly debated on the web for some time and all I have to add is that most certifications (earned via a test or not) have very little value by themselves. My CSM is quite a bit like the CNE, MCSD, etc. technical certifications that were so in vogue for awhile. You could also compare it to a college degree. I know plenty of great developers who never finished college and I know plenty of incompetent people with Masters. I feel my past few years of successes and failures using Scrum is what counts. The certification is great for the resume and clients will like it, but I was happy just to attend and hear what Jeff Sutherland and Joe Little had to say as well as have some great discussions with my classmates.

Microsoft and Compuware are brining some of the content from PDC 2008 to Nashville for those (like me) who were not able to attend. Previews of VSTS 2010, .NET 4.0, C# futures, and Azure will be shown. We are also giving away an Xbox 360. Seating will be limited so sign up early by emailing us at jeanne.waskiewicz@compuware.com.
Posted by Tommy Norman at 10:27 AM No comments:
Labels: compuware, microsoft, pdc 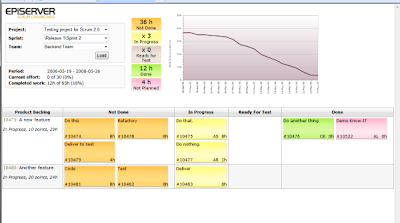 Thanks to the guys over at TFS Times I found this cool web application on CodePlex. This is a web based dashboard for the Conchango Scrum Process Template for Team Foundation Server. It provides some basic rollup information about work item states and hours, a sprint burn down chart, and a sprint task board similar to the WPF application version being released by Conchango next month. You can drag and drop items to different states like Conchango's application aslo.
I had a few issues getting it to work but nothing major. It is pretty cool for a free tool. The WPF app from Conchango has more features, but it costs $90 per license so this can be a cheap alternative.
CodePlex has a ton of TFS content and if you use Team Foundation Server at your development shop I highly suggest you check it out.
Posted by Tommy Norman at 9:01 PM No comments:
Labels: Conchango, scrum, team foundation server

Our favorite Microsoft geek chic Jennifer Marsman is bring the Program Director for Visual Studio Team System Test Edition, Mark Mydland, to Nashville on November 19th. Mark will be showing off some of the new test features in VSTS 2010. There will also be giveaways and free dinner. Space is limited so to RSVP please reply by email to Jeanne Waskiewicz or by phone at (615) 238-0333. Seating will be limited to only 60 guests, so please RSVP as soon as possible. Registration will close at 5 PM Monday the 17th or when we meet our cap of 60 attendees. The event will start at 6:00 PM at the Microsoft offices at 2555 Meridian Blvd, Suite 300, Franklin, TN 37067. Here is a Google map, but do not believe the satellite view. Below is more information about the presentation and our speaker:

This has probably never happened to you, but picture this scenario: a tester finds a bug, writes it up, and sends it to the appropriate developer. The developer can’t reproduce the bug and sends it back. The tester digs around a bit more to find better repro steps. The developer insists it’s a configurable error of the tester. Back and forth we go. In VSTS 2010, this process is streamlined by automatically gathering critical information about the project and code and making that data available when, where, and to whom it is needed. During this talk, Mark Mydland (Principal Group Manager of VSTS Test) will demonstrate these cool new features and dive into technical topics on the new architect tools, some amazing research work for concurrency and for bounds checking, 3-tier execution, and data recording (aka “Tivo for debugging”).

Mark Mydland is the Principal Group Manager for the Visual Studio Team Edition for Software Testers product at Microsoft. In the past 12 years, Mark has worked as a developer and consultant across a wide variety of applications and industries. Mark first joined Microsoft in 2001 working as a member of the Natural Interactive Services Division (NISD). During his time in that group, Mark was the development manager for a team focused on analytics for assessing the efficacy of natural language interpreters with a particular emphasis on driving authoring simplification and relevance quality for user assistance. Based on this work, Mark filed numerous patents and coauthored a paper for the SIGIR journal. In 2004, Mark left Microsoft to work as a Director of Development at Getty Images where he led a change in process from a traditional waterfall methodology to a scrum-based agile approach which brought the release frequency from 12-18 months down to 1 month. Since Getty made extensive use of VSTS, it seemed a natural fit for Mark to join VSTS on his return to Microsoft in 2006. Mark received his B.S. from West Point in 1991. He has also held positions with USWeb/marchFirst and Andersen Consulting/Accenture.

We would like to thank Compuware for sponsoring the event.

Earlier this month Microsoft announced its BizSpark program for startup comapnies. This seems like a great program for any privately held company, in business for less than 3 years, and makes less that $1 million in annual revenue. The reason I mention it is that the program comes with a VSTS MSDN Premium subscription and Team Foundation Server 2008 Standard Edition. As I perform more of my TFS/Scrum coaching engagements I get feedback from smaller, new companies about how they cannot afford TFS and this program could possibly help some of them get the software. If you own or work for a private startup, definitely check out this offering!
Posted by Tommy Norman at 11:09 AM No comments:
Labels: BizSpark, team foundation server

In my Certified Scrum Master training in Atlanta with Jeff Sutherland last week we did a few very cool exercises. The one that proved its intended point the best was the Scrum Penny Game. This game is actually an exercise created partly by Joe Little. This activity really illustrates the benefit of developing in small iterations.

To run the exercise you need 20 pennies, 6 stopwatches, and 10 people. Sit 5 people around a table. Assign 4 of them as workers for department 1 thru 4. The last person sitting at the table is the customer. The other five people will stand behind one of the people seated at the table. The people standing behind the workers are the department managers. The person standing behind the customer is the company president. All of the people standing have stopwatches as well as the customer. Place the 20 pennies heads up in front of department 1. 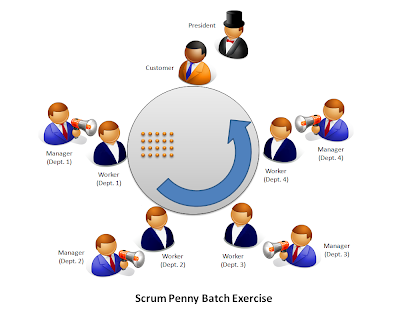 You will run the exercise 6 times. The first pass starts with the worker in department 1 turning over each penny in front of them with one hand from heads to tails. As soon as the worker starts, the manager for department 1 starts his stopwatch as do the customer and the president.

Record the results of the first pass in a table like the one below: 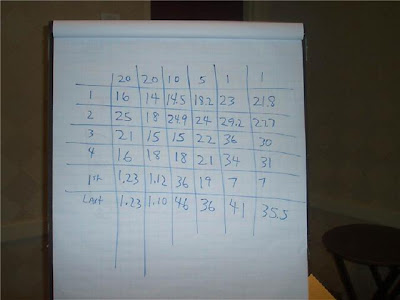 Perform the second pass exactly as you did the first pass. Make sure before you start all the participants with stopwatches reset them. Record the second pass results on your chart.

On the third pass each worker will pass 10 pennies at a time to the next in line. So once worker 1 has turned over 10 pennies, they will pass them to worker 2 who can then start turning over their pennies while worker 1 turns over their remaining 10. It will not be more important that the customer stop when the first batch of 10 pennies arrives and the president stops when the last batch arrives. Record your results in your chart.

At the end of the exercise review the results with the team and you will see some very interesting trends. The chart above is the results from our exercise at the Scrum training.

I found that paradox that the smaller the batch size (or iteration), the worse each department’s individual productivity. As we discussed this we talked about how this illustrated how in Scrum each iteration encompasses all the activities of the SDLC making each individual effort a bit less productive. The other interesting point was how the overall productivity of the “company” was increased. We as a company were quicker to market and completed faster. It really brought home the point of small iterations of work to the entire class.

I have described the exercise to several clients that I am helping adopt Scrum and Team Foundation Server and they have all suggested that it should be something I have each client’s team perform to help them grasp the benefits of the iterative style of development in Scrum.