On March 10th, the board of the Agile Alliance held a reception here in downtown Nashville at B.B. King’s Blues Club. They were in town to tour the Gaylord Opryland Hotel where they will be hosting the Agile 2010 conference in August.

The reception gave local Agile enthusiasts the chance to sit down with these thought leaders and have some great conversations. Benny Baggott, from Ingram Book, told me how great it was to chat with Henrik Kniberg since his book “Scrum and XP from the Tranches” was very influential in his organization's adoption of Agile practices. I talked at length with Laurent Bossavit  about Agile adoption, certifications, and more. It was a real treat.

Phil Brock gave us a sneak peak the new community section of the Agile Alliance website and invited the Nashville Agile User Group to be a test group for the site. If you are interested, please sign up on the site and provide us your feedback. The hope is that more groups will use this site which will provide a cohesive community.

Jim Newkirk gave us an overview of the upcoming conference in August and opened the door for anyone in Nashville who would like to volunteer. If you are interested hit me on Twitter and I will get you in touch with Jim.

It was a great night and there were many new faces in the crowd and I really hope this will translate into surge in activity in the local Agile community. So sign up on our new website and we will see you at our next meeting! 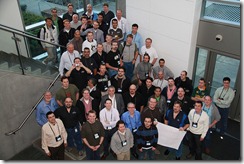 Last week was Microsoft’s MVP Summit in Redmond, WA and this was my first year to attend. The week was packed with tons of content and events and it was hard to decide what to go to at times. The Team System MVPs (now known as the Visual Studio ALM MVPs) basically sequestered ourselves in a room on Microsoft campus with members from the Visual Studio and Team Foundation Server product teams rotating through to get our input on the upcoming RTM for Visual Studio 2010 as well as what we would like to see in the next version (or service pack). It was great to have such immediate access to the very people who write the software we use everyday.

It was amazing how many smart people were in those rooms and I got to finally meet many of the people I interact with online regularly in person including JB Brown, Mickey Goussett, Jeff Hunsaker, Chris Tullier (who was nice enough to show me around Seattle on my last day), and more.

Neno Loje organized a great gift for Brian Harry of a Chuck Norris style T-Shirt with sayings such as “Brian Harry’s planning poker deck has only the zero card.” You can get your very own here.

I have to say to all those people who bash Microsoft for not supporting the developer community, they could not be more wrong. Not only is the MVP program and the summit a great way to recognize thought leaders in the community, but it’s a valuable opportunity for us to provide them with feedback. Their evangelist program is also very active in supporting the local communities.

I just hope I get to go back next year!