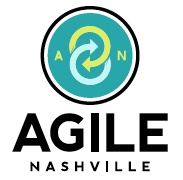 We had a great turnout for the Nashville Agile User Group's April luncheon and there was a good deal of information shared about Agile certifications.

I said I would post some links to online resources and here they are:

There were many interesting ideas bounced around and here is a basic synopsis:

Recently while coaching a client's Scrum team, I noticed that during Sprint Planning the team was starting to concentrate on filling in tasks for their User Stories in the their Agile management tool Team Foundation Server (TFS) and less on the hows and whys around its implementation. This of course immediately drew me back to the basics of Agile from the manifesto of "Individuals and Interactions over Process and Tools". When I thought I had been helping the team by showing them a quick and easy way to enter tasks into TFS with Excel, that had turned around and become the focus of the meeting. This diversion had also started to manifest itself in the work being done in the Sprint as there was more friction between team members when what was being delivered did not exactly fit together initially.

It became clear that we needed to get away from the tool and get the team interacting more when discussing the User Stories so that they all walked away on the same page on how they were going to implement it. The next Sprint Planning only used TFS to bring up the User Stories initially. Once the story was reviewed, we had two members from the team (one developer and one QA) go to the white board where we wrote "Design" on one side and "Test" on the other. The team then discussed how they would test the story and how they would design the implementation to meet those tests concurrently. They drew UI mock ups, work flows, wrote out test scenarios, business rules, etc. Once they were done the tasks for the story organically fell out of what was on the white board. One team member would act as scribe and record all the tasks into Excel to be uploaded to TFS afterwards. 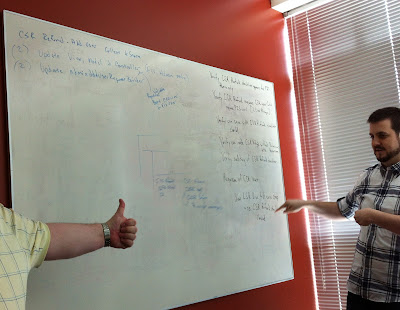 After trying this approach the next few Sprint Plannings (as well as in Product Backlog Grooming), the team agreed that they were coming away with a better idea of how to implement the stories and there was less friction between team members. Another benefit was that more test scenarios seemed to be identified using this technique and thereby increased our test coverage. This also helped make these meetings less tedious since team members were up walking around, drawing, and actively engaging one another.

So if you feel your Sprint Planning and Backlog Grooming sessions are straying from their true meaning, this is a fun approach to try and get them back on track.
Posted by Tommy Norman at 6:19 PM No comments:
Labels: collaboration, scrum, sprint planning
Newer Posts Older Posts Home
Subscribe to: Posts (Atom)