Last year Steve St. Jean and myself did some extensive work creating custom reports for a joint client of ours. The client was a large company well into an enterprise adoption of Scrum and other Agile practices. The reports we made them ranged from a set that helped make the testing efforts and work in progress in each Sprint more visible to multiple views of their Release Plan and its allocation of work to support software capitalization.

The client was gracious enough to give its permission for us to remove any of their proprietary material and release them to the public. Thus the Community TFS Report Extensions project on Codeplex was born.

We are happy to announce our first release of the report pack that includes our first two reports:

The Test Plan Status is a report that extends the functionality found in the Test tab of Microsoft Test Manager.  While Test Manager can show you the completion status of the selected Test Suite, it does not show roll-up information when you have a hierarchy of suites.  This report is intended to fill that gap. 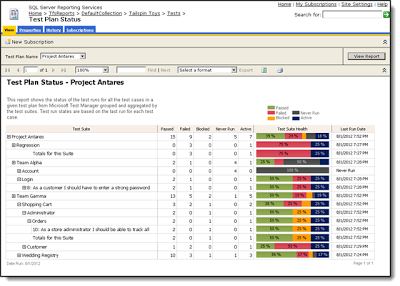 The Release Plan report shows the Product Backlog sorted by priority and overlaid with which sprint the items are forecasted to be delivered based on a given velocity. Only backlog items that have an effort, priority, and are in a valid state are included. Optionally you can specify a deadline which will appear before the Sprint it would fall during so you can see what items are forecasted to be completed by that date. 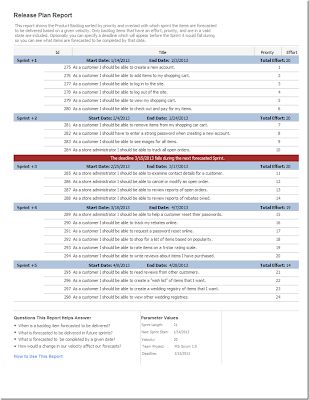 This initial release supports TFS 2010 and the MSF Agile 5.0 and MS Scrum 1.0 process templates (the Test Plan Status Report also support the CMMI template). We will be adding more reports in the near future along with updates to the current release with support for 2012 and some extensions.

Please take a look at the project and give us your feedback so we can continue to make these reports better. If you are interested in contributing, please let us know. The more the merrier!